The beautiful thing about Sled Island is the diversity of bands. It doesn’t matter what your taste in music is, you can probably find something you’ll enjoy somewhere in town.

For those inclined towards that indie folk sound, the Ironwood was a great venue, hosting Iceberg Ferg, Kris Ellestad, Astral Swans and William Tyler.

Iceberg Ferg started out the night with strong vocals and amazing guitar skills that were pure, unadulterated folk. He sang high and fingers flew, and made everyone forget about the rain outside.

Ellestad was his usual captivating self; he fumbled at some points in his set but managed to keep people engaged and on his side with beautiful music in an utterly endearing performance. He doesn’t perform very often, but when he does, it’s always the sort of performance that nearly hypnotizes the audience.

Astral Swans caught the crowd’s attention with a nifty Wolf Parade cover in his sole Sled appearance this year, but there is an album due out at some point this year, so expect to see a lot more Swan around town.

Nashville’s William Tyler really put an emphatic exclamation point on an evening of amazing music, though. His instrumental movement spellbound the Ironwood, and left everyone wanting more – which they got in the form of a short encore.

Meanwhile, over at Dicken’s Pub, a collaboration between Garbage Daze and Sled Island brought together a quartet of heavy, heavy noise to lead the way for Power Trip from Dallas.

First up was local hardcore act Mortality Rate, a new group doing their first set. They set the stage beautifully for a collection of local talent, blasting out a short performance that left the audience wanting more. The worst part about new bands is that it’s hell to find out information about them – they don’t seem to have an online presence, so if you want to catch them again, you’ll have to watch the posters.

Their lead singer was the only woman on stage all night, and she showcased a solid voice that, to my undertrained ears, was what hardcore music ought to be. Her lyrics were powerful and artfully distorted, but still comprehensible.

Call me old fashioned, but I like to be able to understand what the singer is singing, even in this genre. Mortality Rate delivered. 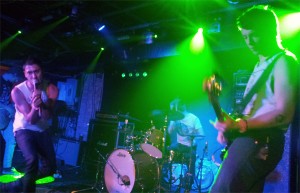 Next up was Calgary’s Exotic Functions. They’re back home after a lengthy tour, which they advised against doing. Another short set showcased a lot of raw emotion, as they ripped through their set list and turned head-bobbing into a full-body vibration.

The front-line warriors were all ears for this one, and lead singer Danny paced the stage like a caged animal, rumbling and roaring with a angry sincerity that the crowd drank up like cheap beer. 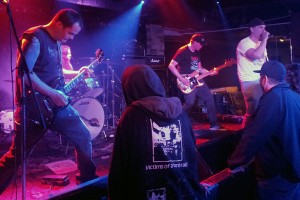 After a bit of lineup juggling, Crystal Mess took to the stage. These guys are described as crossover hardcore punk, but for me, they were like coming home again. Old school showmanship and talent, with a ripping sound that harkens back to the glory days of my own discoveries in punk music. They have a new album coming out soon, and maybe a show in August. 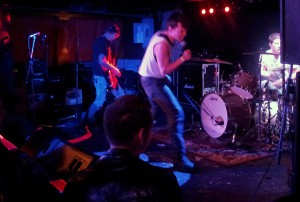 Last of the locals was Skin Colour, and the audience moved up towards the stage like predators circling a wounded soldier. The band immediately drove them a few inches back with an acidic fury, and proceeded to rip out what little might be left in my eardrums with their squealing feedback metal.

All for the Slime God, I guess.

There’s more of every genre to be found in the remaining days of Sled. More hardcore punk?  Check Bamboo, Dicken’s and the Ship. More indie folk? The Ironwood and Palomino can set you up. As always, check your Sled sched for details, and keep on exploring!