It can be hard to get up for a weeknight show, even knowing that the lineup for Sled meant that some amazing performers were putting in a late gig on a school night. The toughest part is getting there; once the music grabs you, all your tired feelings drop away, and you forget about work in the morning.

The rain slowed to a light drizzle on Thursday afternoon, but no one cared at Local 510 – the show indoors was safe and dry, and the parking lot was covered by a series of tents. Some highlights included the bi-talented duo of Nova Scotia’s Construction & Destruction, who each took a turn on the drum set and guitar respectively. I prefered David Trenaman’s voice overall, but these two were chocolate and peanut butter – totally complimentary, and impossible to pick out the better one. They made way for Markus Overland, whose Sled website description was possibly one of the best bios they have up. I wasn’t sure what to expect from “sad bastard death folk”, but what I got was skillful folk with definite hints of Native inspiration. Oh, and the crowd was so into you, Lucid 44; you’re not underrated, but you do deserve the attention. 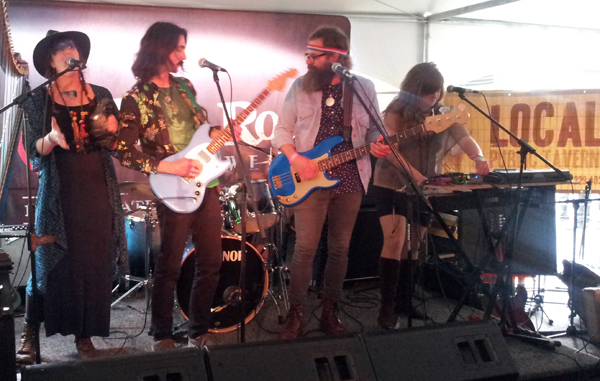 Outside, the local funky fivesome of Devonian Gardens seemed like a perfect fit for a warm, damp day. Equal parts spacey and spunky, their raucous rhythms were cheered by a host of loyal fans, who wiggled and bobbed to their special blend of psych rock. If you’ve ever seen Bend Sinister live, you’ll understand when I call Devonian Gardens their slightly hippier, but equally fun younger sibling.

Heeding calls to arrive early for some of the bigger shows, we skedaddled over to the Palomino, and secured a plum spot before Edmonton’s Diamond Mind took the stage. If you arrived later, you missed out. These boys are high energy, and you can really hear that 60’s surf rock influence – check out the song Better Alone. Imagine if the Beach Boys started last year as an indie band with a predilection towards occasional electronic sounds and fond memories of last summer. 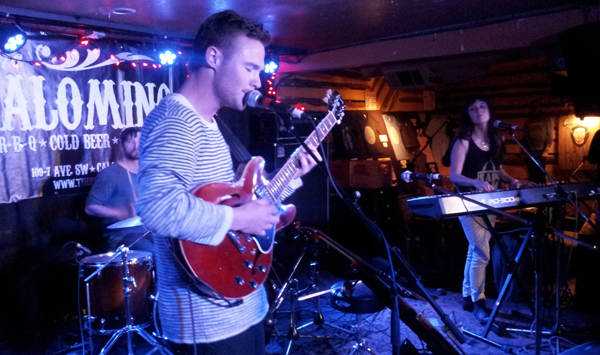 The crowd was nearing capacity as Raleigh‘s set started, and the area in front of the stage was shoulder-to-shoulder with appreciative fans. Layered and complex, the Calgary trio absolutely stunned those who thought they were just waiting for Royal Canoe to take the stage, and reminded their loyal fans of why they love them so much. Every song had a meaning and a back story, and you could feel it in the synchronous contributions from all three performers. Vocally complimentary and instrumentally verbose,  Raleigh was a pure delight that demonstrated the power of local talent at Sled this year.

Of course, Royal Canoe brought their ‘A’ game to Sled, but I’m beginning to suspect they don’t have a lower gear. They are full on, bigger than sound and impossible to stand still around. There was much muttering on Twitter earlier in the day, when the Polaris long list was announced and this band wasn’t listed. Their performance showed just was a serious omission that was. They took to the stage at 12:30 in the morning, and shook the house for an hour that simultaneously seems like mere minutes but stretched on forever. This is another one of those bands that is perfect for Sled – they’re a hundred times more amazing in person. My hands still hurt from clapping along.