The Calgary Folk Festival is an annual event that, for me, has always one of my favourite weekends of the summer. As I headed out Thursday night, I was feeling especially grateful, as the flood almost prevented the event from happening. I know that many volunteers worked incredibly hard cleaning up a very damaged park. Upon arriving, I was amazed to see that the park looked great and as I laid down my tarp, in the spot I always do, I loved the feeling of familiarity as well as anticipation for all the fun that I knew was coming my way. Folk Festival has a special charm, unlike many festivals its environmentally conscious, and attempts to reduce waste by providing compostable packaging and reusable plates. Water is free – you just have to bring your own water bottle. You can bring in your own food to cut down costs, and there  are spaces for children and families to hang out and play.  Another wonderful thing is most people leave things at main stage while wondering around to check out side stages. I have never had anything touched or stolen. My friend lost her credit card and twenty dollars one year, and found they both were returned to lost and found. Of course, the music is the best part, so let’s talk about that! 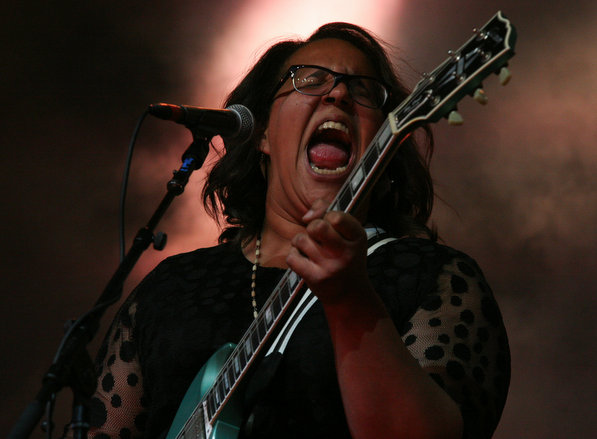 Thursday provided tons of great music choices, particularly with the option of being able to see bands on the Twilight stage, which is set for an alternative to the main stage but a bit bigger than the side stages. I decided to stay at main stage, and spent the first few hours kicking back listening to the bands, visiting with friends, and enjoying some great food. I tuned in for M Ward, who put on a good show with some great original songs, along with a few fun covers. I was really excited for the Alabama Shakes, and headed up to the front to dance. They did not disappoint; front woman Brittany Howard was full on and her performance blew me away.  Playing their hit Hold On early in the set, they continued to rock for the rest of the evening. After dancing for awhile, I headed back to my tarp. I sat down and noticed that the sun was starting to set, at the same time a storm rolled in and the sky was absolutely amazing. A beautiful Alberta sky, coloured with pink, orange, black and grey. As Brittany was singing her heart out, the sky lit up with lightening. Thunder soon followed, lending itself to the music – a perfect accompaniment. Thursday ended with a literal bang; a very good start for a festival that almost didn’t happen.

Day Two of the festival started somewhat early for me, as I was able to get there in time to check out the Twilight Stage. Playing that night were the Bahamas, Hayes Carll, The Heartless Bastards and Shiv Shanks. I kicked off my shoes, laid out my blanket and basked in the warm sun, while I enjoyed a super chill set. The Heartless Bastards stood out for me, and I loved Erika Wennerstrom’s voice. She stood apart from the men with her deep, soulful vocals. Next, I headed over to check out Sarah Neufeld. A violinist for the Arcade Fire and The Bell Orchestre, she has a solo album coming out soon. I must admit that she was not fully on my radar, until I heard an interview with her on the CBC. I liked the songs she played and decided to check her out. Her set came with mixed reviews from those I was watching with, but personally I really enjoyed her. Her music was raw and interesting. Her style was simple – it was just her and her violin – but complex in the sounds she produced, and the depth she brought.

Next, I headed over to the main stage for Bahamas. I really enjoyed this set: charming, funny, with solid indie folk tunes – there was not much to dislike. I hung out on main stage for a while longer, and while I was not as into Hayden, I know others really liked the set. I enjoyed hearing The Heartless Bastards for the second time in a single day, but after mellowing out for most of the afternoon and early evening, I was ready to dance. I headed back to the Twilight stage to check out The Mexican Institute of Sound, an electronic music project created by DJ Camilo Lara. A fusion of traditional music and folk with electronic, I was interested to see how it translated. I went to the side-front with the rest of the non-seated crowd, and the energy was amazing. They had pumped up the crowd and soon, everyone was dancing and jumping. There was no sitting at this show – the entire crowd was on their feet within minutes. It was freeing and fun, and in true folk fest fashion, people really let loose. The people watching was as much fun as the dancing itself.

At this point, I was ready for Thievery Corporation. They continued the party and kept the entire crowd on their feet. Their music reminded me of the nineties, which was nostalgic in a good way  (I liked most of the nineties, other than the fact that I had really bad hair). I couldn’t have asked for a better day two: beautiful weather, chill music, and an amazing dance party.

I had big plans for Day Three, but after a super fun two days, I started later than intended. With a little bit of missed music guilt, I headed over for a 4:20 show, aptly named Roll your Own. There, I found the amazing combination of Elliot BROOD, The Harpoonist and the Axe Murderer, Michael Hearst’s Unusual Creatures, and Royal Canoe. This stage was super fun. All the bands were great, but Elliott BROOD and Royal Canoe were standouts for me. Described as Indie Pop, Royal Canoe were super interesting with electro pop sound. These Winnipeggers push the limits of pop by using mixed media. They have a hip hop flavour, and are engaging and tons of fun. Elliot BROOD was getting lots of hype and it was clear why – they are a Gemini-nominated band, and have also been short listed for the Polaris Prize. They have some serious chops. A three-piece country alt band, they are unique and engaging, and they stood out in an already impressive crowd.

Saturday continued and I bounced around to a few different stages, but the highlight for me was Steve Earle. I debated whether to watch him, or go see Elliot BROOD again, but decided that I owed it my dad to watch Earle, as I had grown up listening to his music. He is a total cowboy and his voice was unexpected; I made the assumption that it would have lost some vigor over the years, but I was wrong. His voice was rich, intense and as strong as ever. His band was amazing as well, and I enjoyed his performance. He played his hit Copperhead Road, along with a few others classics, but I must admit I preferred some of his other tunes as he seemed more enthused by his newer music.

Day Four started out with lots of packing, as I was unsure if what the weather would be like, and I wanted to be prepared. I started out at Stage Two, which was the Eau Claire stage that had to be moved due to the flood. It was great, and I must admit, the location was better than what it was in previous years, where you sometimes had sound bleeding over from the other stages. It was warm outside, which was a surprise and a treat. I sat down to watch Evening Hymns, Royal Canoe, Tequila Mocking Bird Orchestra and Thus:Owls. It was a wonderfully collaborative stage, and each of the bands were stand alone great. This stage was an excellent start to my Sunday, and also helped ease my never ending music guilt, as I had missed a few stages in the morning that I wanted to see. Next, I went back to the Twilight stage for some more fun. I couldn’t resist seeing the Mexican Institute of Sounds again, particularly when they were paired with Samantha Martin and the Haggard, Nomadic Massive and Saidah Baba Taliba. This stage was awesome. There was jazz, blues, and a hip hop mix that was delightful. Each band enhanced the other, and the crowd was up and dancing in no time. The stage ended with Samantha Martin rapping Salt-n-Pepa’s Shoop! Hello! So much fun (well, for me; maybe not as exciting for anyone under the age of 20!)

The weather started to take a turn late in the afternoon, so I headed to main stage to gear up for the rain and to watch Caravan Palace. All I knew about this band is that they are from Paris, but I pretty much love all things French, so I was psyched for this show. Described as electro-swing and gypsy jazz, I had no idea what to expect. They put on an energy filled show with tons of dancing, great stage presence and created an instant buzz on the Festival grounds. They even pulled up an older volunteer, who certainly did not lack any energy as he danced with the band. I would love to see this band again, and I am sure they would be a great time. The next band I was excited for was Kurt Vile. He played a solid earthy set with good tunes.

The final act of the Folk Festival was Creedence Clearwater Revisited. The band has two original members, Stu Cook on bass, and Doug Clifford on drums. They played all of their old classic songs, and gave a heartfelt performance. Stu and Doug even gave each other a huge man-hug on stage. They kind of reminded me of my dad, with cheesy lines like “we will be on the road again – when our bus driver sobers up.” The lead singer even played a little air guitar  – while holding his actual guitar, but it all added to their charm. It was a fun ending to a fantastic weekend. As my editor would say, it was a folking great time!