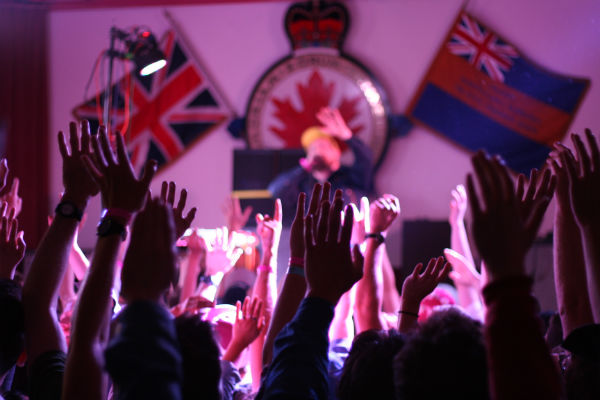 There is something about the downtown Legion. It pulls you in, with it’s rough charm. It’s wobbly upper floor. It’s usual crowd of servers and bussers. It’s comfortable, plentiful chairs and great sight lines. A day at the Legion, spared from venue hopping, is a day to relax and take in Sled in a different way. 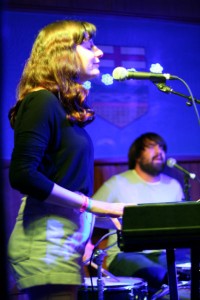 Friday night started off upstairs with Coach Longlegs, a power pop trio from Newfoundland who have mastered the art of the pre-song introduction followed by a very short, catchy song. Drummer Chris Scott started off by acknowledging that there were a ton of bands playing Sled, and while not everyone in the audience would remember them, they would certainly always remember Sled. They then proceeded to prove themselves wrong – everyone at that show is going to remember that set. Alternating between some serious rants that had the crowd in stitches (their shirts are pay-what-you-want, not pay-what-you-can, they are fragrance-free straight-edge and believe no one should bring a dog to one of their shows), esteem building (be yourself! every night is the night!), and band bashing (it’s not hard to be in a band, but it’s fun because you get to hang out with your friends – it’s that easy), Coach Longlegs had the crowd eating out of the palms of their hands. Their lo-fi pop flavour is catchy and bubbly, and the amount of fun they have on stage is infectious.

Downstairs, Edmonton’s Renny Wilson (formerly Sugarglider) was entertaining the crowd some discoesque-pop with a serious side of danceability. Their covers of the Guess Who’s ‘No Sugar Tonight’ and the Beatles’ ‘Helter Skelter’ were fast-paced and fun, and were more than simple odes to the originals. There was some serious funk up on the stage, and Wilson had the moves like… well, you know. 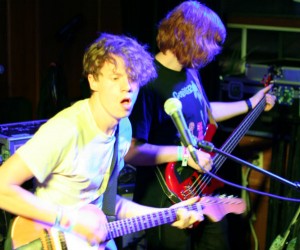 Back upstairs we flew, to crowd in with the abundance of local fans who were eagerly awaiting a performance from 36? These local lads kept the upstairs floor shifting as everyone surged forwards to be as close to the band as they could. If Calgary has an indie darling, 36? is it. They are solid in their instruments, while the vocals draw out the fun and push it through the crowd like a wave, letting it wash back over them in feedback loop that intensifies the performance. Their latest album has a lot of local buzz, but don’t expect it to stay Calgary’s little secret for very long. 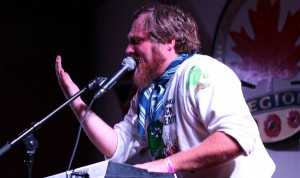 Back downstairs, there were some people in the crowd who had no idea what to expect from B.A. Johnston. Those in the know were already grinning from ear to ear. Imagine if Zach Galifianakis and Wesley Willis had a baby in Hamilton, and gave him too much sugary cereal and not enough attention as a child. (Note – I actually love Wesley Willis, and I am not making fun of his schizophrenia here – TP) Sporting not one, but two identical ‘what are you staring at, dick head?’ shirts, Johnston proceeded to rip into Regina, Big Rock, Mount Royal University, the Legion and Sled itself in between short, catchy songs that the audience immediately learned the words to, and proceeded to shout back at him. Bizarre, hilarious songs about deep fryers, his mother, and working in Fort Mac. He regularly jumped painfully down from the stage to interact with the crowd around him, varying from relatively harmless selfies to sticking his sweaty head up inside one poor fan’s shirt. Listed as an all-ages option on the Sled website, I would disagree – his comedic musical stylings are certainly best left for an adult audience!

Rounding out the Legion night was long-time electronica master Dan Deacon. The man is no rookie, having formally educated himself in electro-acoustic and computer music composition; Deacon has been at this since 2003 and shows no signs of slowing down. He was engaging and personable, things you don’t always expect in this genre where the machines are often the stars of the show. He interacted beautifully with the crowd, adding them like another layer to his mix and playing them out like a rehearsed performance. The interaction took the crowd from passive listeners to active, engaged dancers, and Deacon’s energy and enthusiasm had them jumping for joy well into the night.