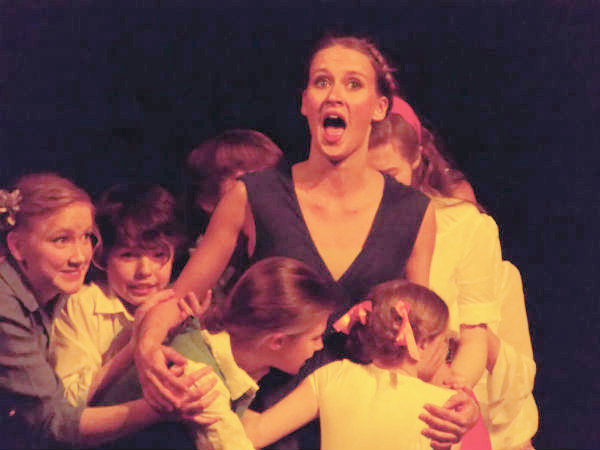 When was the last time you sat down and watched the Sound of Music? It’s probably been a while, right? But if you’re like Director Aaron Coates, and the capacity audience at the Lantern Church, it doesn’t matter if you saw it years ago, or never before.

The songs Coates knows we all know by heart were all a part of the opening performance of the Sound of Music Sing-a-long, a production he directed with the Cowtown Opera. This isn’t Coates’ first shot at directing not only actors, but audience members – he directed last year’s hit Phantom of the Opera sing-a-long production as well.

It’s a winning formula for the young local opera company, and the Lantern was filled to bursting with an anxious audience of both young and old, ready to be entertained and have a chance to feel like a part of the production.

They were not disappointed. The cast, crew and musicians put on a performance that would have had Rogers and Hammerstein do-re-mi’ing out the door afterwards, just like the rest of the audience.

While the entire production was a delight to experience, there were seven small spotlights that shone with wattage that gave them as much presence on the stage as the larger voices around them. From the powerful voice of Liesl (Hannah Pagenkopf) and the strong acting of Friedrich (Garrett Romanzin), to the bright smiles and brighter singing of Louisa (Anna Van Leeuwen) and Brigitta (Isabel Pogue), the sweet voice of Marta (Julia Hueppelseuser), the boyish charm of Kurt (Harrison Monte)… and of course, the scene-stealing Gretl (the so-aptly named Aria Leotaridis), whose shy but adorable performance put the movie’s Kym Karath to shame.

These seven gifted young performers were seamless, strong and sounded wonderful. Pagenkopf, the eldest of the children and already possessing a voice more powerful than you might expect, has quite a celebrated and victorious path so far, and one can only assume that her Von Trapp siblings could aspire to similar heights.

That’s not to say that the kids were the only ones worth watching (although a youngster in my row was quite vocal in asking when the kids would be back on stage – every time they left his sight). The young performers were shepherded by their Maria (Sara Staples), and she led them with a positivity and a passion that pushed her voice to the furthest corners of the chapel. From her triumphant opening volley of “The Hills Are Alive”, to the soft and subtle insecurity of Maria’s “I Have Confidence”, Staples tugged the audience’s heartstrings and vocal chords, leading us all with the same care and concern that her character displayed for her young charges. A Texan by education, but at her heart always a Calgarian, Staples displayed the talents that have taken her all over North America.

Her equal for the night was JP Thibodeau, whose portrayal of the strict but yielding Captain Von Trapp was equal parts warmth and conflict, as he swiftly transformed from whistling hardass to doting father and then, smitten softie. The pair worked wonders together, performing a swift push-and-pull that brought them from strangers to lovers in a record pace that felt neither rushed nor false. Thibodeau, the freshly minted Artistic Director for Storybook Theatre, brought a humanity to the role of the Captain that bloomed with his last blast of the whistle.

Of course, no family exists in a vacuum, and the supporting cast was equal to the task of keeping up with the Von Trapps. Karen Minish’s powerful voice rang clear through to God as Mother Abbess; Taylor Robertson was not given much time to expand upon her role as The Baroness, but she made mountains out of those minutes, giving a slick feeling to the character that made us almost sorry that she had met with (spoiler?) an unfortunate mountaineering accident?

Susan Yule was effervescent as our introducing host, as well as the character of Max. She had to be – she was also in the ensemble, and donned a habit from time to time as Sister Berthe. She certainly helped to warm the audience up with her good humour, and led us through some introductory yodeling that came in handy for a few during the intermission.

Accompanying these strong vocal talents was an equally strong orchestra. The music was pitch-perfect, providing a richness that echoed the warmth of the little church setting, and provided enough strength for the singers to stand upon the classic sound and really shine.

The show was considerably condensed from the original musical, but provided a cohesive storyline that was clear and smooth, and the perfect length, given the large percentage of the audience that were, shall we say, not exactly buying beers during the intermission. The kids in the audience were, by and large, kept highly entertained by the well-paced action on-stage, and the opportunity to belt out a few tunes, as well. It is a wonderfully balanced family show that doesn’t skimp on the subtle humour that will keep the grownups happy, and still retains the charm and wonder that older fans can reminisce to.

You only have a few chances to catch this show before it goes goodbye, farewell, auf Wiedersehen, good night; there are performances on Friday and Saturday nights, and a Sunday matinee. Tickets can be found through www.cowtownoperacompany.com, and if you’re a fan of the Sound of Music, you need to Climb Ev’ry Mountain to see it this weekend.